Top Day Hikes in the UK

Top Day Hikes in the UK

(chosen by the Osprey team!)

From the most challenging climbs and toughest terrain, to gentler hikes through beautiful valleys, there’s a hike for everyone.

“I’ve hiked Ben Nevis in both September and May and I would definitely recommend the springtime months – it is stunning.”

Duration: A full day, around 7-9 hours

My top hike in the UK is definitely Ben Nevis. I climbed it with my husband and two of our best friends and it was our last child-free hike before we had a baby. It’s an absolute trek, but a beautiful one!

You can start at the bottom of the mountain in glorious sunshine but then be traipsing through snow at the top. You never know what you’re going to get at the summit – it could be really clear or it could be foggy so you have to enjoy the route rather than what you think you might see at the top.

I’ve hiked it in both September and May and I would definitely recommend the springtime months – it is stunning. There are so many flowers out and if you’re lucky enough to get a clear summit (much more likely in springtime) then you’ll be able to see as far as Ireland.

Some of my favourite moments were throwing snowballs at the top, eating a lot of cake halfway up the mountain and chatting to lots of people on the way. The views are simply stunning and every turn you take brings a new breath-taking scenery photo stop.

It took us a full day to climb up and back again and my top tip is to not rush it, so start early! Getting down is just as hard as getting up there and you’ll begin to feel it in your knees if you race to the top. There is a lovely waterfall and lake which is a fab lunch stop but keep in mind that the hardest part of the climb is ahead of you.

The toughest parts of Ben Nevis are the ‘false summits’ when you think you can see the top of the mountain about five times before you actually get to the top! I definitely had a moment where I decided that maybe 75% of the climb up was enough for me.

After some encouragement from friends I made it to the top and it was so worth it. Make sure you have a good bar of chocolate, a beer or a hot chocolate to celebrate when you get there as you’ll feel on top of the world.

Make sure you carry a pack big enough for plenty of water and snacks. I carried a Skimmer 20, my husband a Stratos 34, and my friend a Hikelite 18. Bear in mind it is cold and will possibly be raining at the summit even if it’s roasting at the beginning of the walk, so pack a good coat, a hat and a pair of gloves. I learnt this the hard way the first time and had a very soggy, cold walk down.

I was much better prepared second time round with lots of layers to wear. Plasters for blisters are a must too, as well as good solid walking boots. This isn’t a hike you want to do in flip flops!

“As you make your way around the route, the dramatic views of the rocks below amidst the fast-moving white water do not disappoint.”

Looking down at Chesil Beach from the clifftop, reminds me why the Portland Bill walk along the coastal clifftop route is one of my favourite day hikes. Chesil Beach is a spectacle in itself, forming around 5,000 years ago and connecting Weymouth as a tombolo (when the mainland is attached to an island by a narrow piece of land) to the Isle of Portland. The beach stretches approximately 17 miles from Portland to West Bay.

From one end to the other, the rocks change size significantly from roughly the size of potatoes to tiny round pebbles. Legend has it that pirates and smugglers who arrived on the shore knew exactly where they were just by grabbing a handful of shingle.

One of the things you will notice around Portland is the limestone. Quarries across the island are still active, an industry that has provided Jurassic period rock for buildings such as St. Paul’s Cathedral and Buckingham Palace.

Make your way to the sculpture park to check out some of the local rock carvings. Tout Quarry sculpture park was a working quarry until it closed in 1992, having been active since 1780.

Here you will see some 50 odd sculptures and carvings as well as wildflowers which also home stunning butterflies and attract a range of other wildlife such as bees and rabbits. Although, don’t mention the ‘R’ word in front of locals who only use the word bunny, as rabbits are a warning sign of bad luck to islanders here!

The route itself is accessible to those of all abilities, around 16km in total, this walk can be done in 6.5 hours with plenty to see on the way. The historic lighthouse is a must-see, situated on the southern tip of the island, surrounded by rugged coastline and stunning sea views.

The lighthouse is still in working order and you can also take a tour to the top for a small fee.

This part of the hike offers a great opportunity to grab a light snack and a hot or cold drink at the kiosk/diner adjacent. While you are at this part of the Island, make sure to take a look at the pulpit rock.

The monument represents an open bible leaning on a pulpit, formed in 1878 when quarrymen cut a natural arch away. What makes this sight even more unique is the foot holes in the stone which allow you to climb to the top of the formation. If you’re an avid climber, Portland is your place.

Whether you’re looking for a place to do some bouldering, or you brought your ropes and helmet and are craving that adrenaline kick, you will not lack opportunities to get your climb on!

You can also venture off the coastal path to view other sites such as the Grade II listed building of St Andrew’s church. Widely believed to be of Saxon origin, later presented to the Benedictine Monks of Winchester by Edward the Confessor in 1042 who built their own church over the site.

Underneath you will see Church Ope Cove, a preferred route of invasion from would-be invaders, the first recorded invasion dates back to 789 AD by the Vikings. For those whose idea of adventure is in the form of fishing, swimming, and snorkelling, this is a must for you.

As you leave the island, I’d recommend a stop at Billy Winters to replenish your strength from your day of adventure. Whether you fancy a tea or coffee, cake, fish and chips, burgers, ice cream or maybe a glass of wine or beer, you’ll find it here.

Plus, the view out across the coast is stunning too! 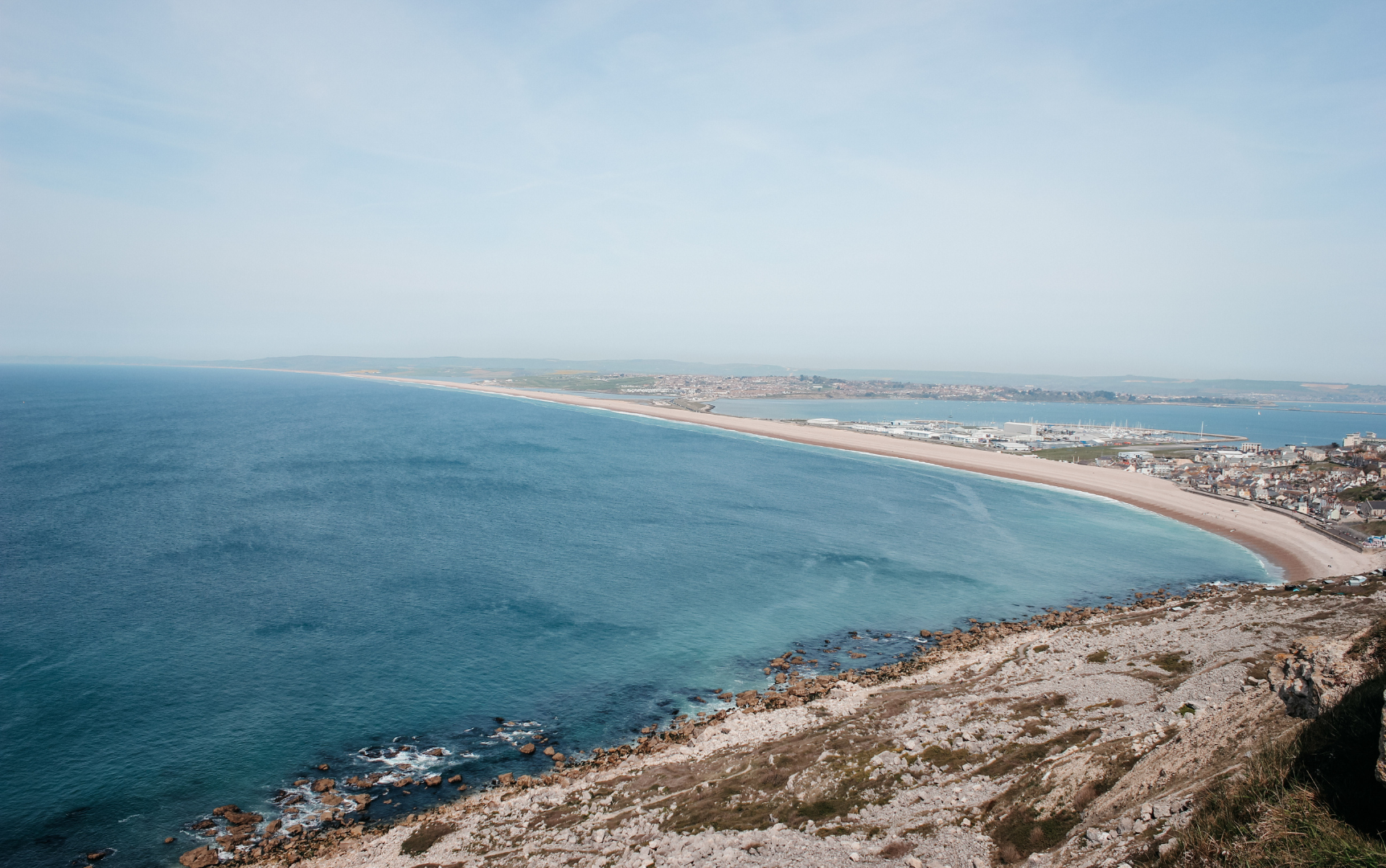 In terms of what you’ll need to take with you, the good news is, you won’t need too much. Aside from a water bottle and a camera, I’d advise packing a waterproof jacket and a fleece jumper – a hilltop walk means that the weather can change really quickly.

Lastly, if swimming or snorkelling is on your agenda make sure to remember a towel!

“Waymarked trails, which are steep in places, lead through picturesque scenery.”

One of my favourite hikes is via the Woodchester Valley Mansion (National Trust), a beautiful and tranquil wooded valley in Gloucestershire.

The secluded wooded valley contains a ‘lost landscape’ with remains of an 18th- and 19th-century landscape park with a chain of five lakes. Park Mill Pond is the last of these lakes and features a man-made island that is now a heronry. Large carp can also be seen in the waters.

The wood also hides a disused quarry, which was in use until the early 1900s and provided stone for the Woodchester Estate, and an old Boat House.

We went in October and were lucky with the weather, it turned out to be a lovely sunny day. My favourite memories were seeing lots of dragonflies flying over Middle Pond (mid-route) and seeing the old Boat House and reading about its fascinating history. Built in the early 19th century, it was restored in 1998 and bats now roost in the roof space, emerging at dusk to hunt over the lake.

The restoration of this varied landscape is an ongoing project. Waymarked trails, which are steep in places, lead through picturesque scenery, passing an unfinished Victorian mansion.

The walk didn’t take long, maybe 90 minutes maximum, but I’d say it was intermediate. Some paths are steep and uneven so sensible footwear is a must-have.

My partner and I took the Talon 22/Tempest 20 but, realistically you could get away with taking anything as small as a 10L pack if you’re only carrying a rain jacket, snacks and water like we were. My partner and I were staying at the Woodchester Valley Vineyard Barns at the time, they were lovely too!

“Only for the most experienced hikers, Crib Goch is a Grade 1 Scramble across an exposed ridge that is in a totally different league to the other routes up Snowdon.” 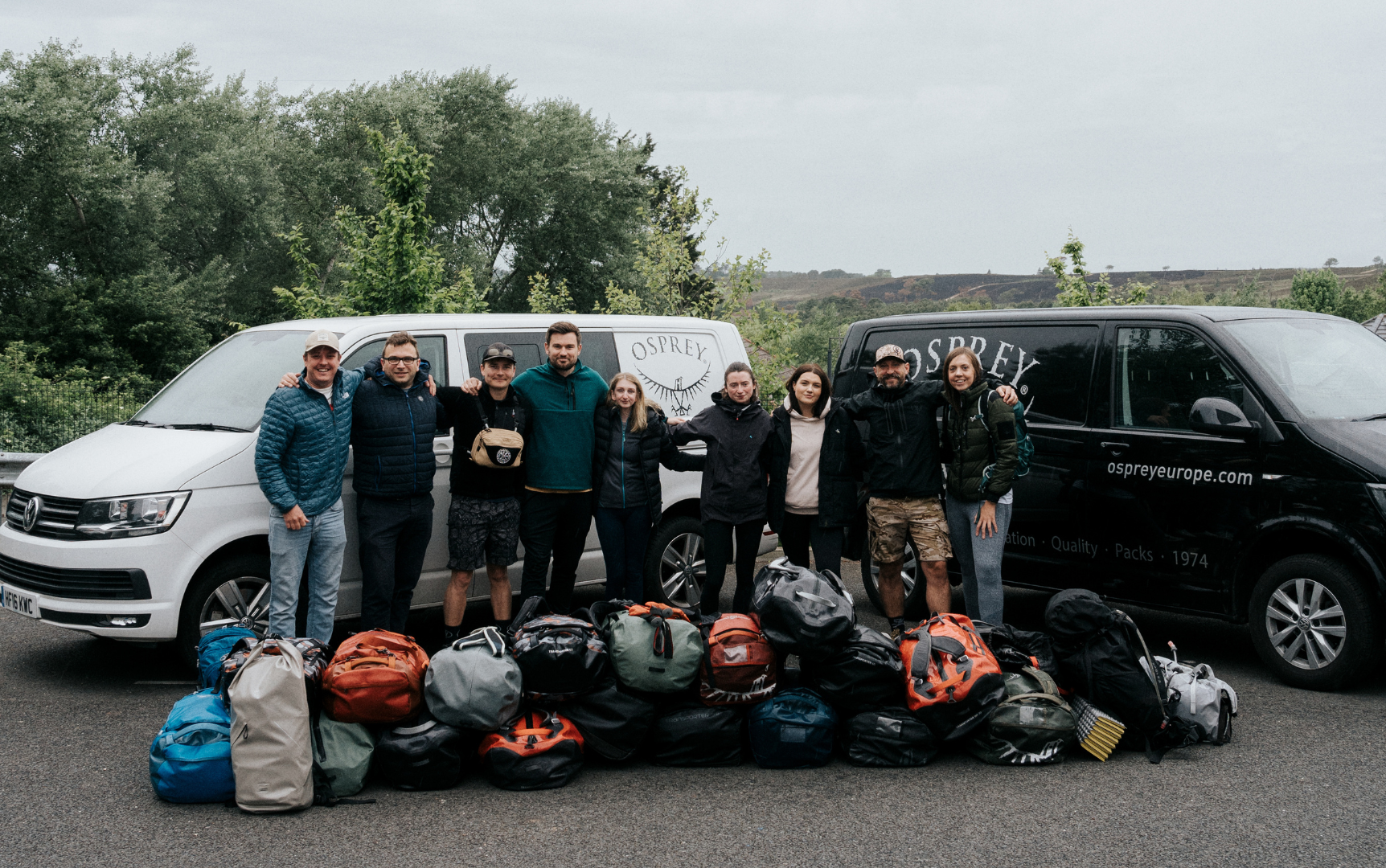 We were a mixed abilities group of ten, but all of us had the same goal of tackling Crib Goch and summiting Snowdon together.

Crib Goch is renowned as the hardest route to the Snowdon summit, something I definitely did not appreciate when initially signing up to take on the hike! I love being in the great outdoors, but I am not experienced in mountaineering and I was extremely nervous when we first hit the trail and gazed up in awe at Crib Goch.

If you are thinking about undertaking this route, do make sure you research it extensively and ensure you know what you’re getting yourself into. If you’re new to mountaineering, I’d recommend having an experienced guiding group to support you. Our team was accompanied by a group of mountaineers who helped us at every step of the way to reach the summit safely. 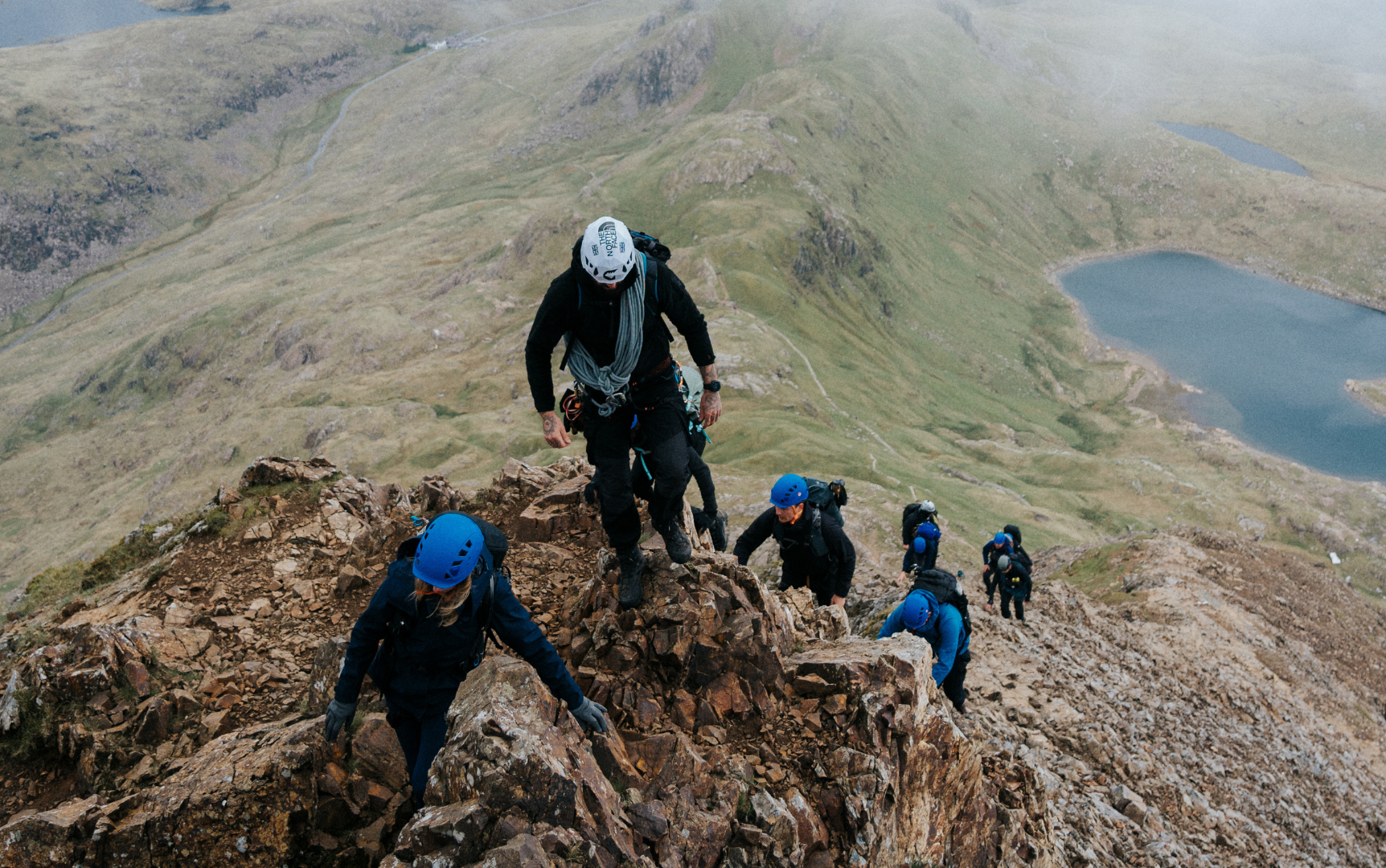 Starting at Pen y Pass we gradually made our way across the uneven ground until we reached a teasing climb up to the start of the Crib Goch trail. The team was incredible, with the experienced climbers holding back to quite literally give a hand to the climbing novices of the group.

Then we were faced with the Crib Goch itself – a Grade 1 Scramble across the exposed ridge that is in a totally different league to the other routes up Snowdon. The ridge is only 200m long, but honestly, it can feel like the longest 200m of your life, the sheer exposure is something I cannot put into words.

When we got over to the other side, that’s when I realised why this is one of the top hikes in the UK.

Looking back at the ridge, in our case, as the rain began to pour, I had never felt so proud of myself – the sense of achievement was indescribable! I conquered my fears and pushed myself completely out of my comfort zone. The team and their experience made it possible, I would not have been able to do it without them. 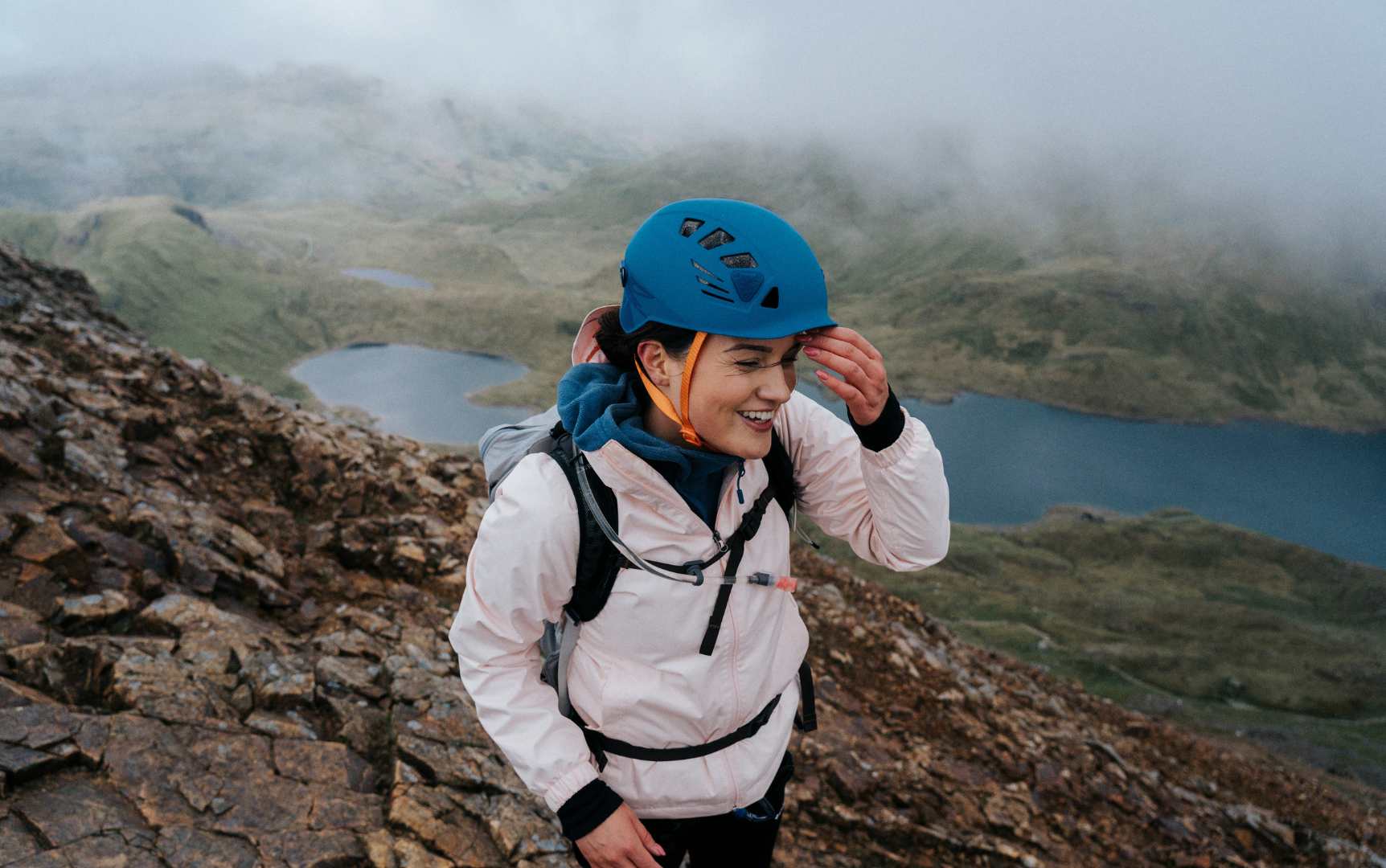 During our hike to the top we experienced everything from glorious sun to icy downpours which really emphasised the importance of packing correctly for the mountain. I’d recommend lots of layers and waterproofs, even if it’s not forecast to rain as the mountain can be unpredictable. Nothing will dampen your spirits on this hike though – Snowdonia is quite simply breathtaking! 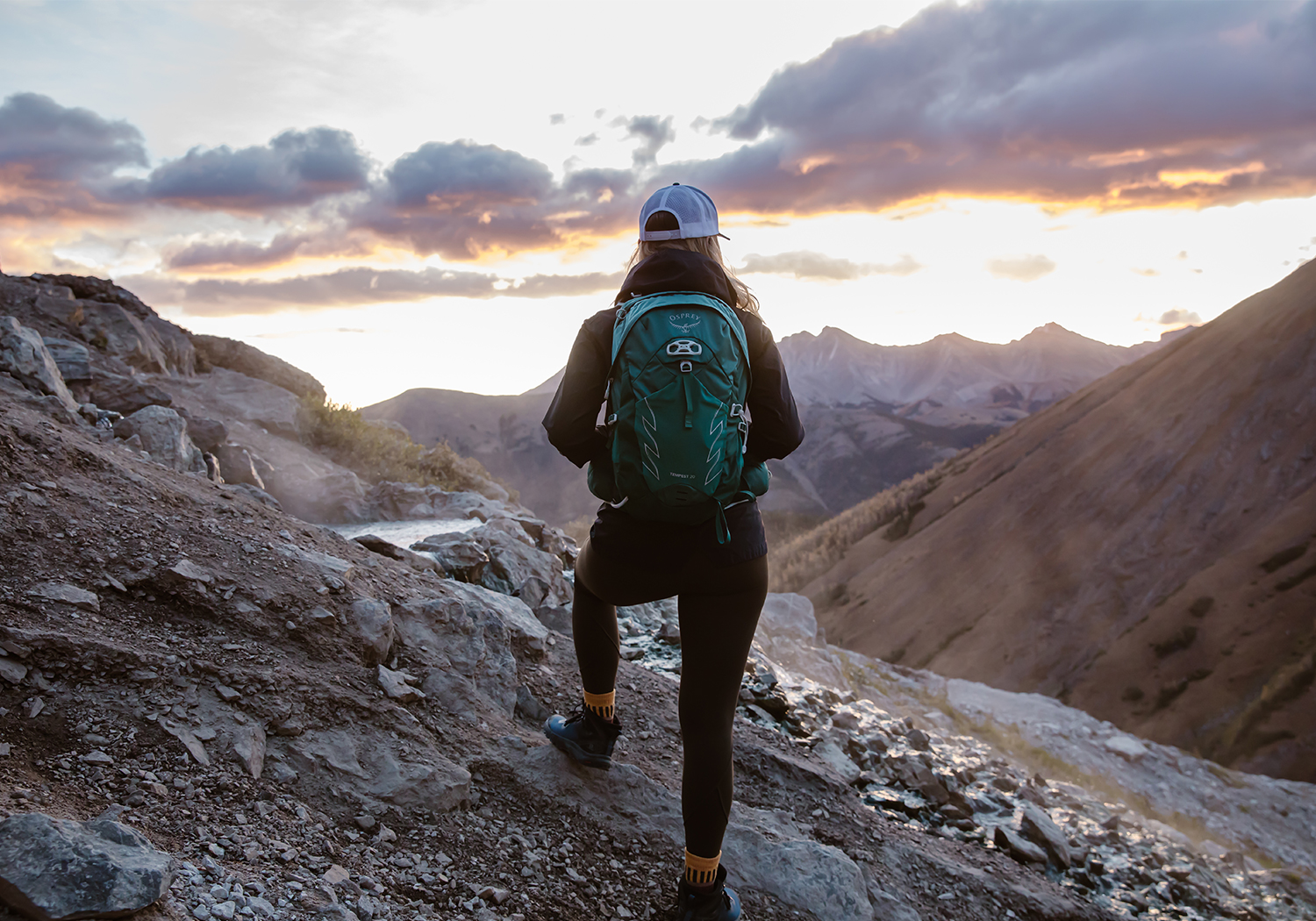 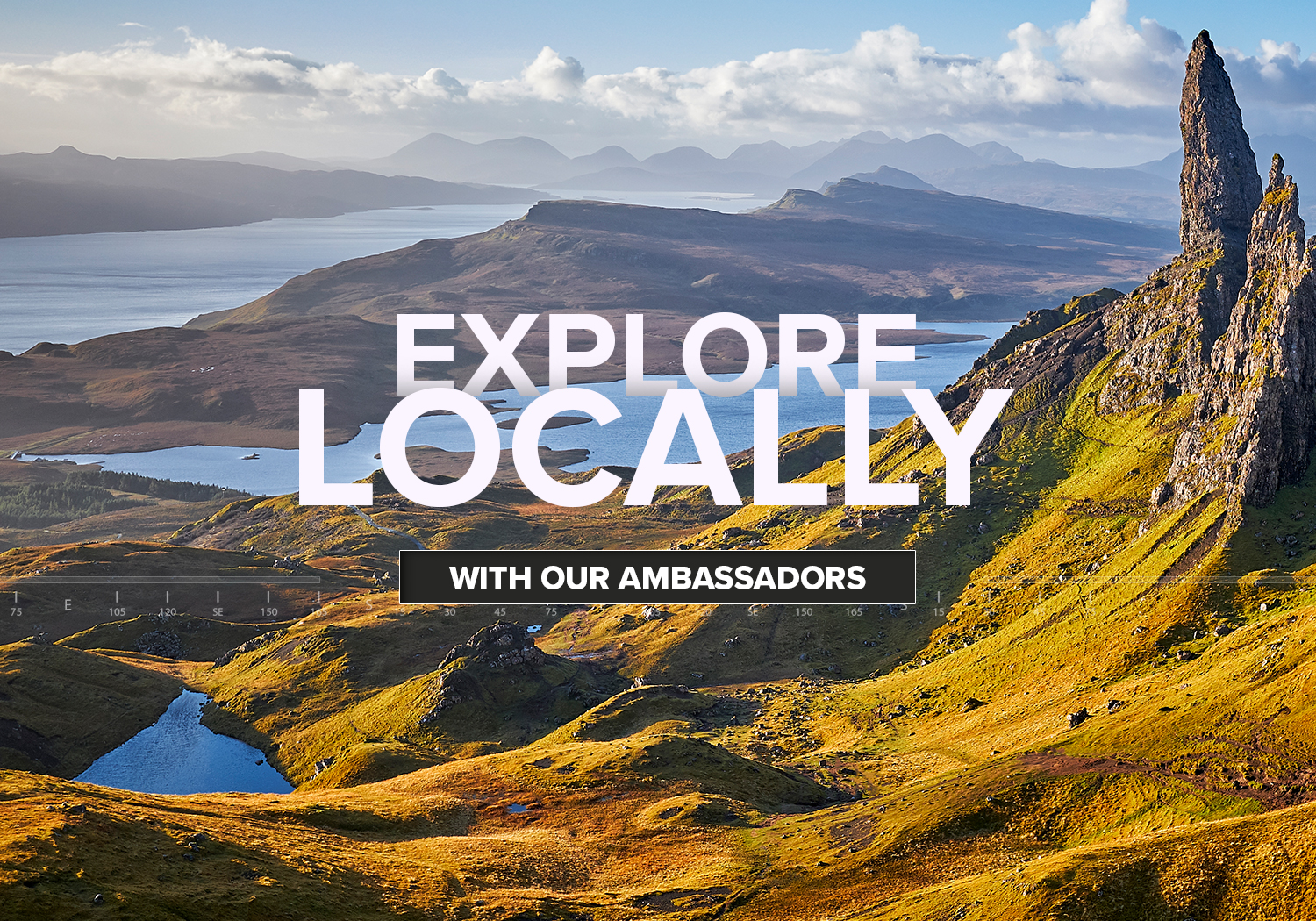 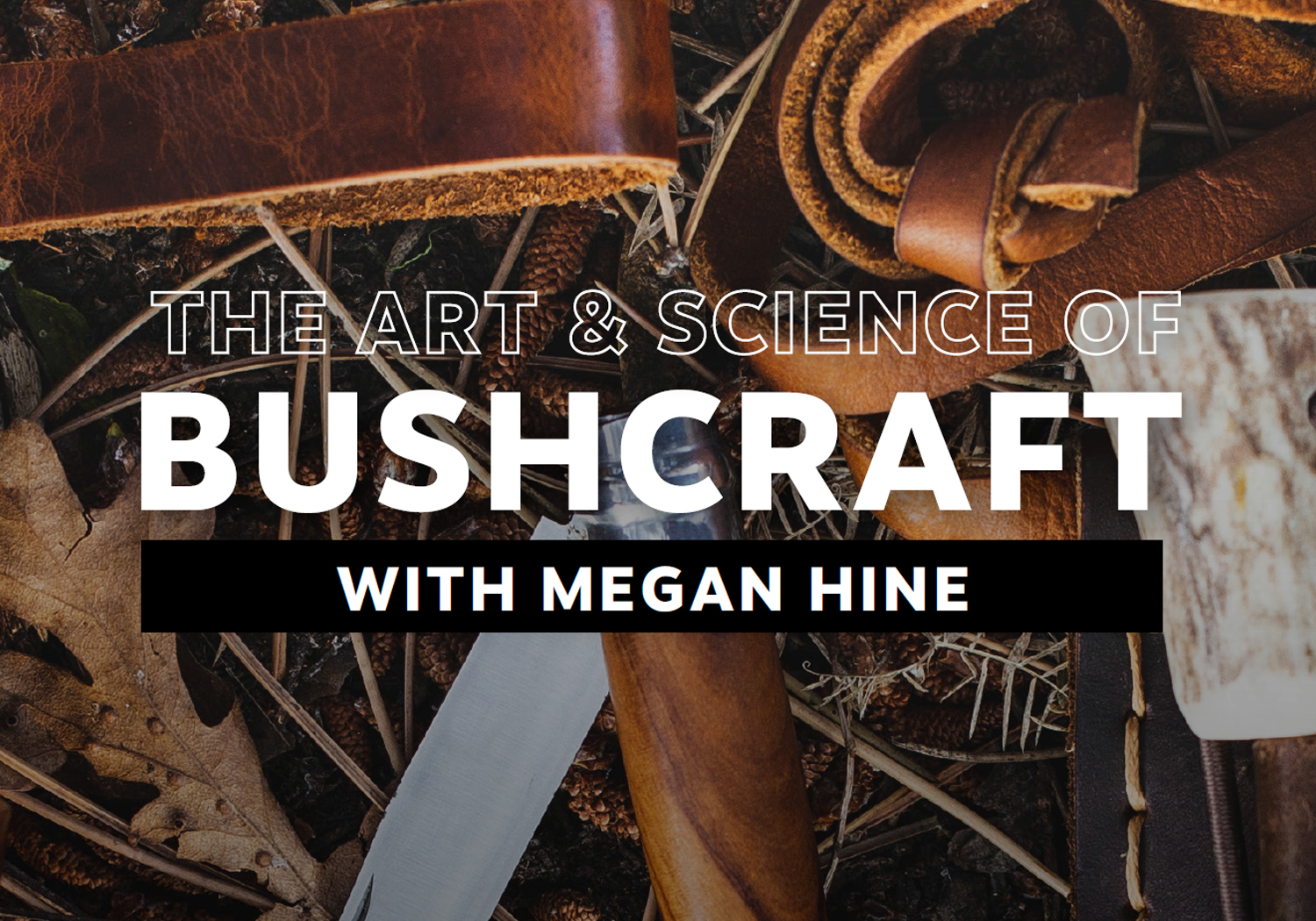 The Art of Bushcraft with Megan Hine – Part Two

The Art of Bushcraft with Megan Hine – Part One 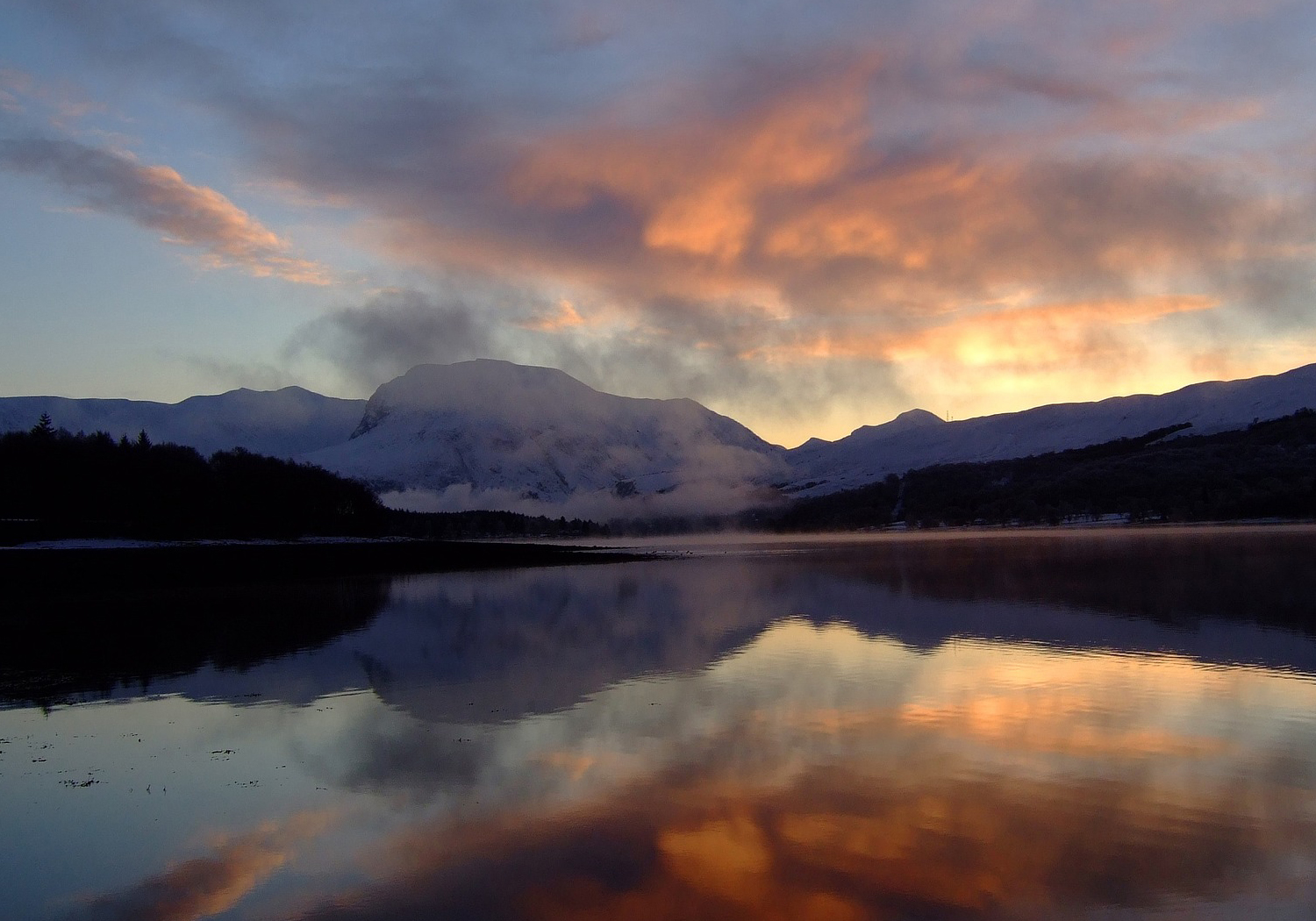 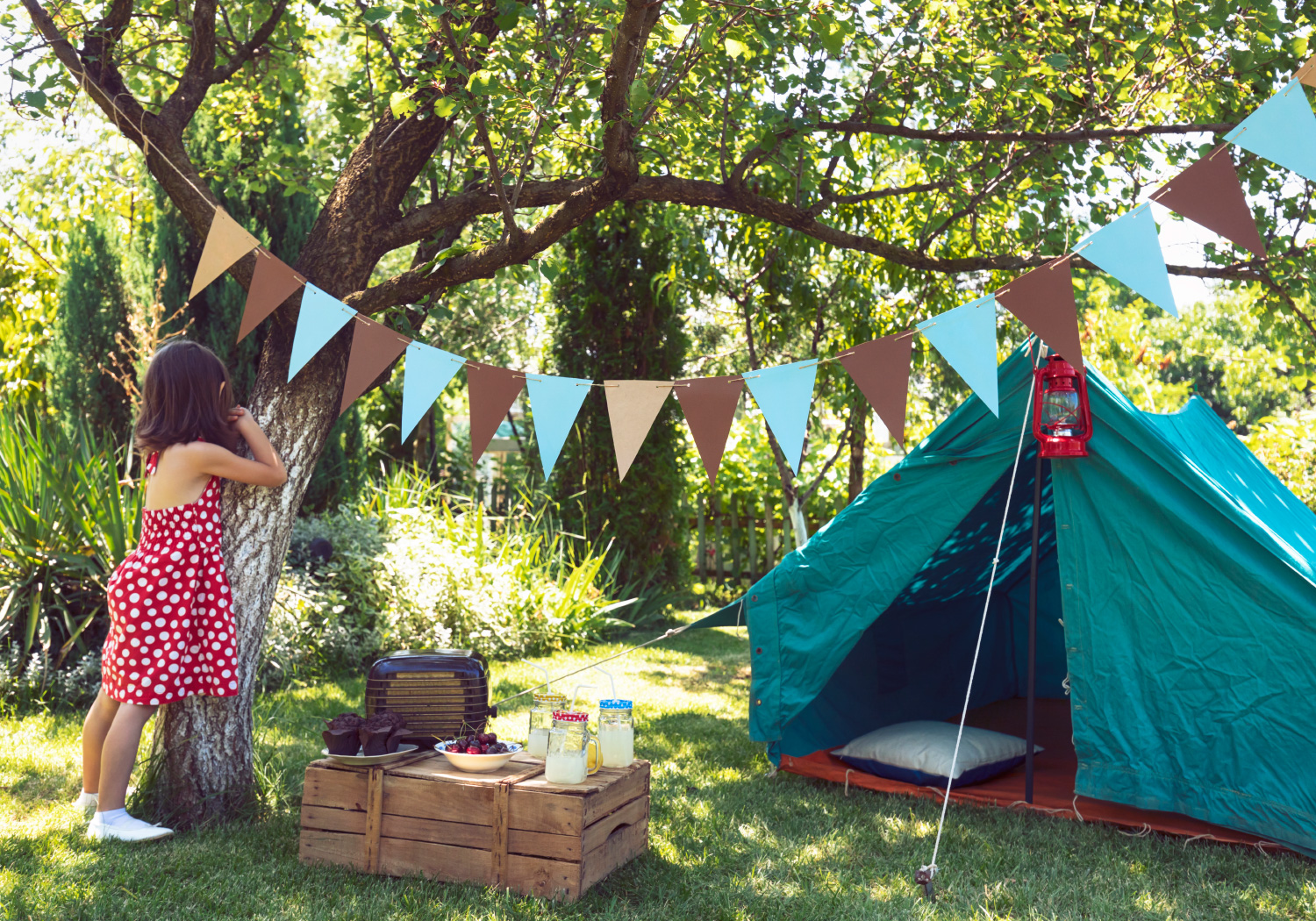 Easter entertainment for the whole family 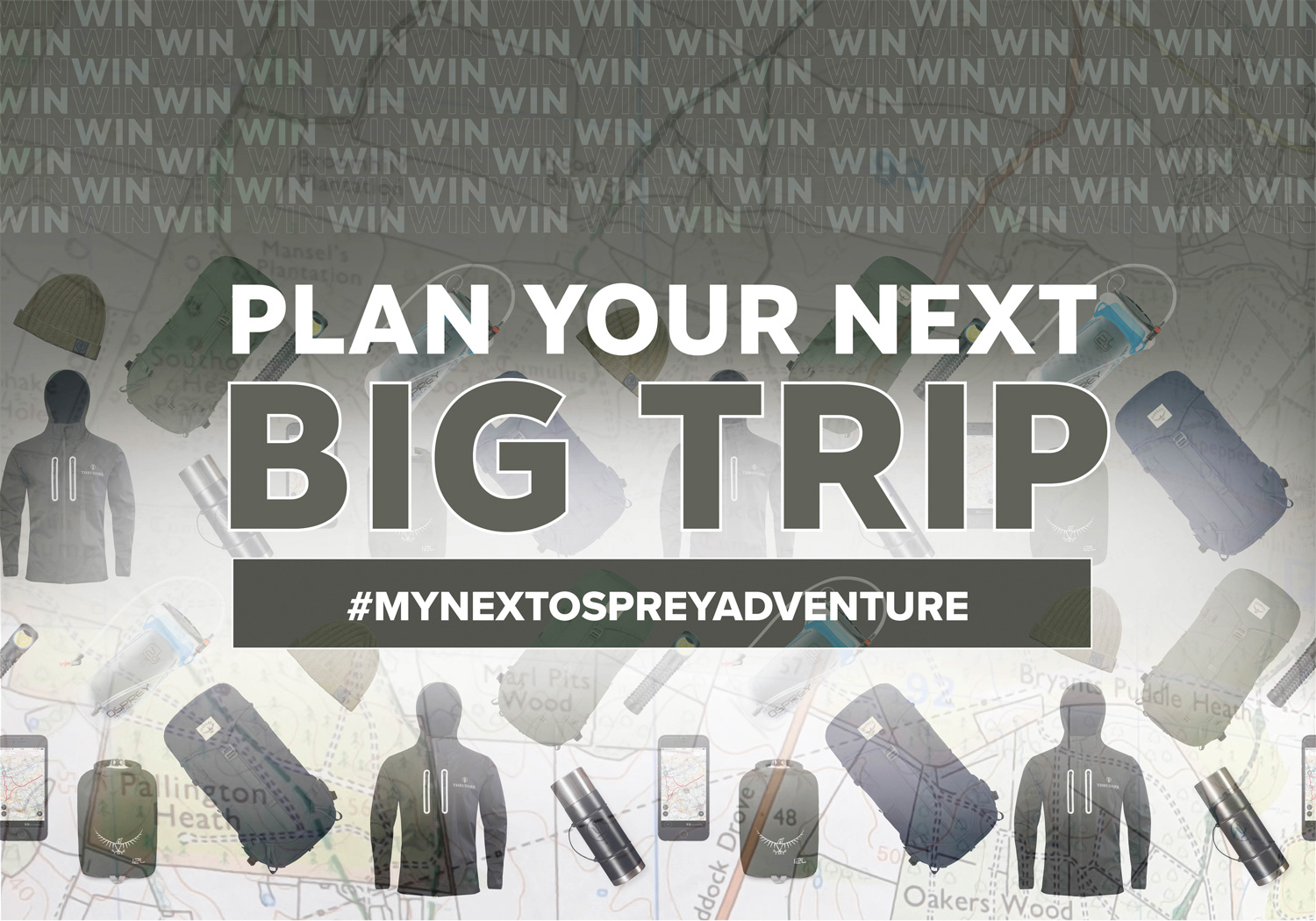 Plan Your Next Adventure 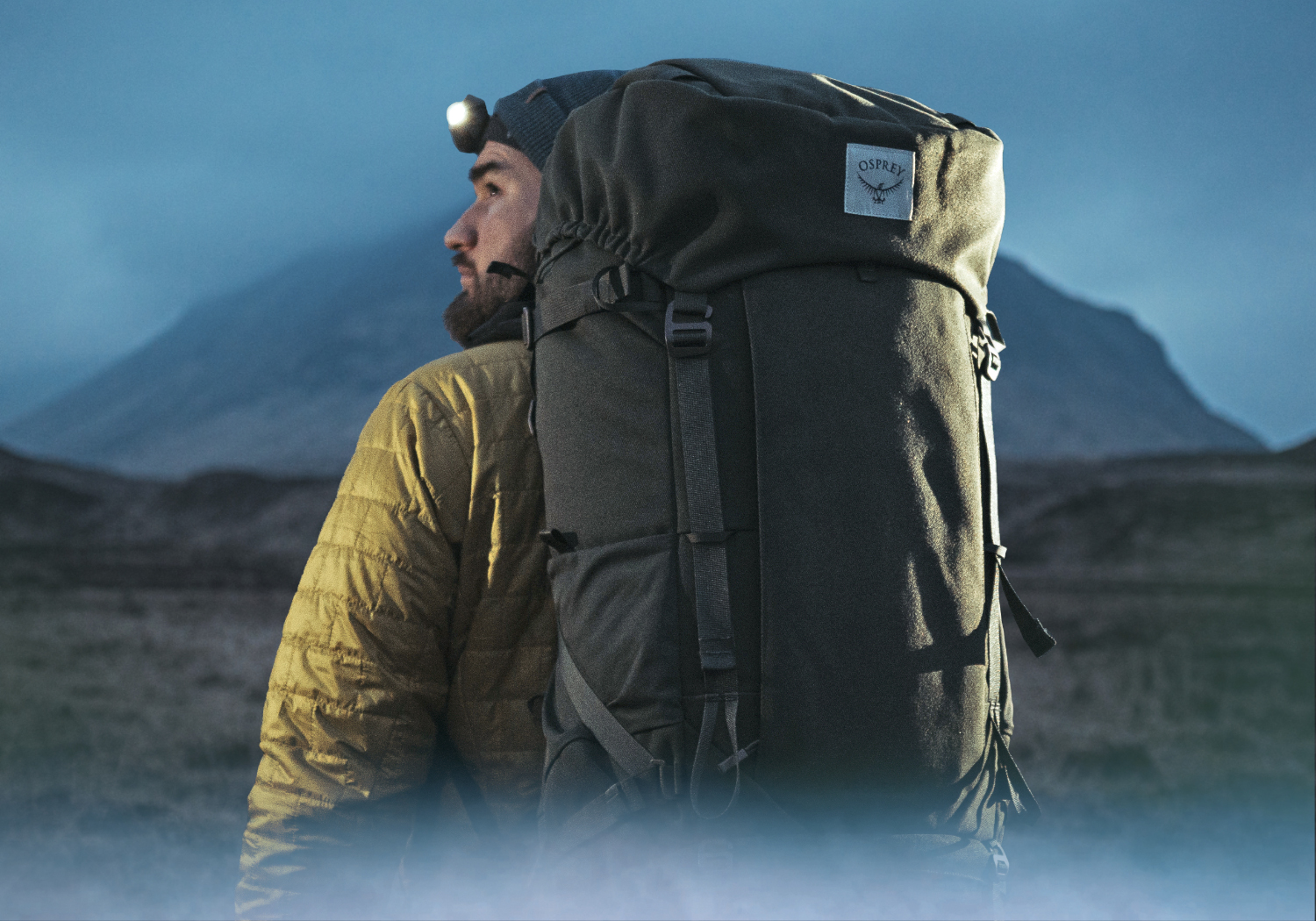 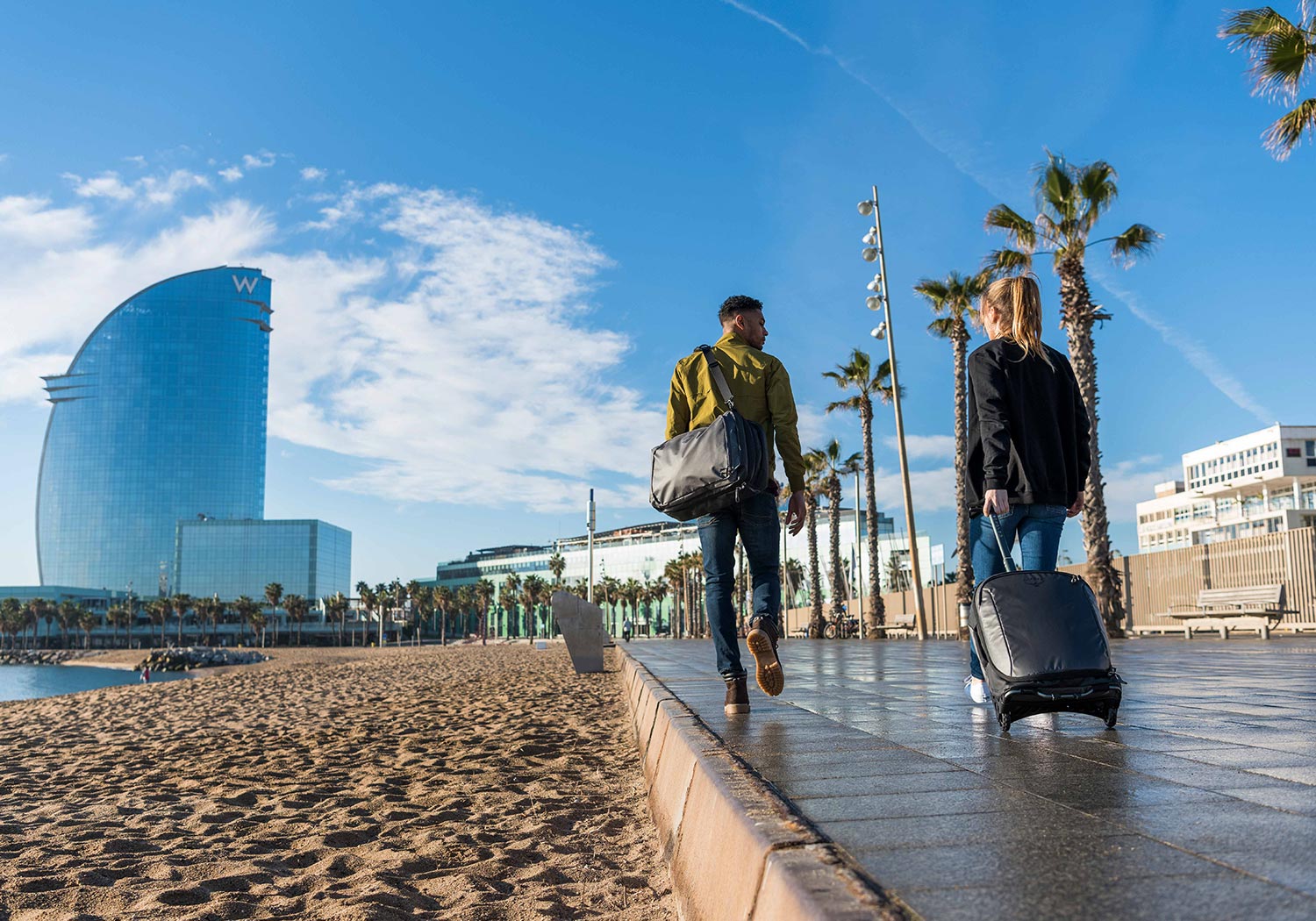 5 Reasons why City Breaks are the Best Way to Travel